Helsinki is all change 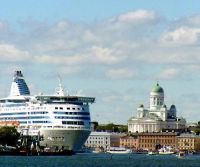 Whilst Finnair flies serenely on with its services from both Heathrow and Manchester to Helsinki (with connections to Asia) it is all change with the budget carriers.  easyJet is no longer offering Gatwick, Manchester or Paris CDG on its timetables from July onwards whilst Blue 1, part of SAS, will introduce a scheduled service to Edinburgh operating on Mondays and Fridays between 29 April and 28 October 2011.

Although it calls itself a low cost airline Blue 1 offers a two-class service including premium seating.  It already serves Heathrow twice daily in competition with British Airways and Finnair.  Norwegian will begin serving Gatwick from its new Helsinki base with six weekly flights on 12 May

The French market also continues to be served as both Finnair and Blue1 operate between Helsinki and Paris CDG 35 and 12 times a week respectively; however, French carriers, including Air France, are curiously missing in Finland. www.helsinki-vantaa.fi/home