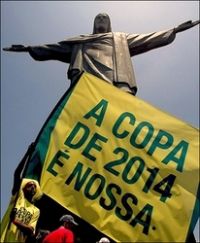 Brazil and the European Union (EU) have agreed in principle to a new air services agreement that should be formally signed in the summer, well ahead of the 2014 FIFA World Cup and 2016 Olympic Games.  Presently the market is dominated by TAP Air Portugal with 27% of the market (by seat capacity) and Brazil’s TAM with 22%.  Air France has more capacity than Iberia (12.1% and 11.3% respectively) whilst British Airways and Lufthansa are split with 5.7% and 5.5%.

Under the agreement airlines will be able to freely operate direct flights to anywhere in Brazil from anywhere in Europe as the agreement will remove all restrictions on routes, prices, and the number of weekly flights between Brazil and the EU.

Sao Paulo remains the main gateway to Brazil and with the once popular Rio making a comeback typically with TAM and then BA adding from London and Lufthansa joining them in October from Frankfurt.  In the north Iberia is adding Iberia to Fortaleza and Recife. http://europa.eu