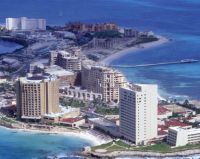 Air France is to launch a three times weekly service between Paris CDG and the popular Mexican conference and resort centre of Cancun.  It previously operated twice weekly from Orly but the service was dropped for this winter. The airline offers 10 flights per week between Paris and Mexico City.

The services start on 21 October 2011 and will be operated by a two class 472-seat Boeing 777-300.  Air France will compete with the French-based but German-owned holiday airline XL Airways and to some extent British Airways out of Gatwick and both Martinair and TUI charter arm Arkefly from Amsterdam.

Cancun is considered a Caribbean destination and is rapidly expanding leisure area very popular from North America with its all year round tropical weather.  It currently has around 72,000 hotel rooms available of which 76% are 5-star or greater. http://cancun.travel/en