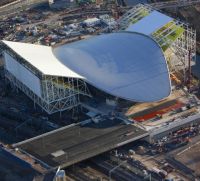 At a meeting with London Organising Committee for the Olympic Games (LOCOG) to discuss the support that London’s hotels were giving to London 2012 the British Hospitality Association (BHA) strongly refuted claims that hotels were profiteering from the event.

Paul Deighton, CEO of LOCOG, noted that hoteliers who had been part of the agreement with LOCOG had fully conformed to its fair pricing agreement, offering room allocation to LOCOG at below market rates for the Olympic Games.

Ufi Ibrahim, BHA’s Chief Executive, said that the industry is playing its full part in making the 2012 Olympic Games a success.

“Recent press comment concerning the prices that agents appointed by LOCOG – in particular Thomas Cook – are charging for Olympic ticket and hotel packages has suggested that London hotels are profiteering.  This is certainly not the case.  London hoteliers have no control over the prices that agents are charging,” she said.  “These agreements stipulate that all participating hotels will charge room rates calculated on an agreed formula, which restricts hotel operators from increasing prices beyond CPI (consumer price index) increases and ensures fair pricing.  That rate broadly represents the average of a hotel’s room rates between 2007 and 2010.  Further discussions are taking place. www.bha.org.uk