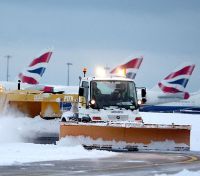 Following a report into the December snow crisis which resulted in 4,000 flights being cancelled, BAA has promised a £50m investment.  The report, which the Spanish-owned company commissioned itself, said that there had been a breakdown in communications and lack of "preparedness" for the bad weather.  At all levels the airport operator came in for criticism.  The report noted that some airlines did not fulfil their obligations when flights were cancelled or delayed.  However BAA Chief Executive, Colin Matthews, made it clear that no heads would roll.

The report makes 14 recommendations, which focus on improving crisis management procedures and establishing a "snow plan" which sets out specific responsibilities for BAA, airlines, the regulator, and air traffic control.

The report noted that offers of help to clear the snow from BAA construction contractors were not taken up quickly enough.  The lack of an agreement between the airport and ground handlers employed by airlines to de-ice aircraft meant it took too long to clear aircraft stands.  Fears that the airport would run out of de-icer kept one of its two runways closed. www.baa.com/assets/Internet/BAA%20Airports/Downloads/Static%20files/BeggReport220311_BAA.pdf