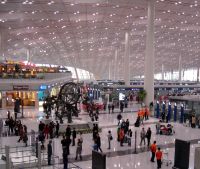 ACI (Airport Council International) preliminary traffic results for last year, based on reports from over 900 airports worldwide, indicate that global passenger traffic grew at a better than expected rate of 6.3% and cargo rose strongly by 15.2%, as compared to 2009.  Actual aircraft movements remained stable at just under a 1% increase.

Monthly passenger growth worldwide in 2010 was consistently high between 5% and 10% with the exception of a significant setback in April due to the volcanic ash cloud that hit Europe particularly hard.  Another anomaly impacting traffic, mainly in Europe, was the unusually harsh winter weather in December.  Despite these setbacks Europe still registered growth of 4.3% thanks to strong international summer and fall traffic. www.aci.aero