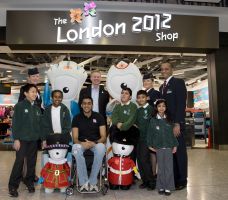 Terminal 5 Heathrow is the home for a new shop dedicated to the London 2012 Olympics.

The flagship store is set to give all British Airways (the only user of T5) international and domestic passengers the opportunity to stock up on a piece of sporting history as they pass through the terminal.

The shop opening was celebrated with a special in-store screening of the latest instalment of the London 2012 mascot film ‘Adventures on a Rainbow’.  During the film Wenlock and Mandeville, the Olympic mascots, meet GB athletes Tom Daley, Shanaze Reid, Mandip Sehmi, Phillips Idowu and Ellie Simmonds, and discover British icons including a Queen’s Guard and a Beefeater.  The soundtrack to the film is composed by British composer Thomas Hewitt Jones and has been recorded by talented teenagers from across the UK in the National Youth Orchestra.