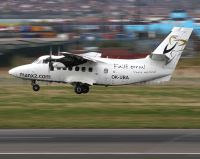 Press reports in Belfast suggest that Manx2 is to stop its service from the dockside airport to Cork at the end of the month, although at the time of writing this could not be verified from the company's website.  Manx2 is a virtual airline or ticket provider.  It sells seats on a plane but the aircraft is owned and operated separately.  It was involved in a fatal crash 10 February on a flight between Belfast and Cork in which six people lost their lives.

Lawyers for one of the survivors have accused Manx2 of reneging on its responsibilities after the airline claimed a lawsuit for damages should be taken against the Spanish operators, Flightline BCN.  The aircraft was owned by Airlada.

All other flights including from Belfast to Blackpool, Isle of Man and Anglesey are continuing as scheduled.  The company also sells seats as Manx2 out of the Isle of Man to various destinations. www.manx2.com