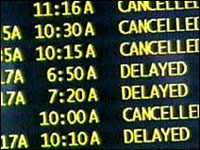 British passengers who suffer flight delays of more than three hours could claim compensation from their airline, following a County Court hearing in Middlesbrough last week.

The case concerns three Thomas Cook passengers who were claiming compensation for a delay of more than 28 hours on a flight from Manchester to Las Vegas.  The Judge ruled in favour of the plaintiffs but the airline successfully applied to have the case ‘stayed’ pending a referral to the European Court of Justice.

Acting for the passengers is a company called EUclaim whose Chief Executive Hendrik Noorderhaven said: “It is vitally important that passengers who may have such claims now pursue them and bring them to the attention of the airlines as soon as possible”.

Under EU law, airlines can cancel flights up to two weeks before departure without paying compensation to its passengers and they do not have to pay in cases of ‘extraordinary circumstances’ which could not have been avoided even if all reasonable measures had been taken, such as unusual technical problems just before take-off.  The European Courts of Justice is now likely to have the final word. www.euclaim.co.uk www.auc.org.uk