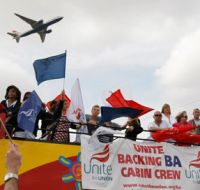 Unite, the union representing the majority of British Airways cabin staff, is organising yet another ballot, the fourth.  The call is for a strike, or series of strikes, during the busy April period, which includes Easter.  In spite of stepping down as Chief Executive (he now holds the same position with parent company IAG) Willie Walsh will remain in charge of negotiations leaving the new CEO Keith Williams dealing with other matters.

The ballot opens on Tuesday (1 March) and closes on 28 March.

The union has made the claim that BA has targeted the organisers of the protest saying that 18 members of Unite have been sacked and another 70 suspended during the dispute.  The British Airways retort is that the union has not received a majority call for the action.

“We will fly a full schedule at London City and London Gatwick.  We are also planning to fly 100% of our Heathrow long haul operation and a substantial part of our Heathrow short haul schedule,” said a British Airways spokesman. www.ba.com www.unitetheunion.org