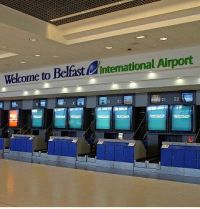 City of Derry Airport has finally now a proper dual carriageway access from Londonderry itself.  Last week the £45m A2 scheme was officially opened after two years of congestion and disruption.  It involved upgrading nearly five miles of the old single carriageway road.

The road includes three new roundabouts located at intersections at Campsie, Broadbridge and at the airport.  The new road has once again focussed attention as to whether Northern Ireland needs three airports, one (International) of currently around 5m passenger throughput, Belfast City of 2.7m and Londonderry 338,000. The City of Derry Airport has been the subject of an on-off relationship with Ryanair.

The A2 is part of the Northern Key Transport Corridor, the main road connecting Limavady to Derry and provides links to the Maydown and Campsie industrial zones as well as the airport. www.roadsni.gov.uk