Delta strengthens its position at Heathrow 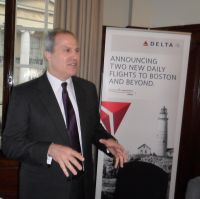 Boston and Miami will be two new destinations for Delta Air Lines at Heathrow from 27 March.  The airline is probably the major benefactor of the 2008 North Atlantic “Open Skies” arrangement established at Gatwick before that time and now with up to 10 daily departures out of Europe’s premier gateway.

Also contributing to its growth is the takeover of Northwest Airlines and its Detroit/Minneapolis routes and membership of Skyteam.  The partnership with AF/KLM has given Delta more slot opportunities and Premium Class customers can also use the excellent Alliance lounge in T4.  Further slots were acquired via the approval of the American Airlines, British Airways and Iberia marketing arrangement.

Last week Perry Cantarutti, Delta’s Senior Vice-President in Europe, who is based in Air France Paris headquarters, hosted a Delta briefing in London where he noted a strong financial performance in 2010 when the business recorded a US$1.4bn profit.  Mr Cantarutti said that the airline's UK regional operations would stay much the same for the coming year and said that the carrier’s presence at Gatwick would continue.  “With a daily service Atlanta has performed well.” www.delta.com