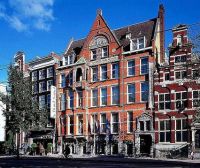 Sofitel, part of the Accor Group, will open nine new hotels globally around the world this year including the first property in India.  Located in the centre of Mumbai, in the financial and commercial district, the 302-room hotel will offer French flair and what it calls “decadent amenities” as well as the branded So FIT gym and So Spa.

One of the most interesting of the new properties is the Sofitel Amsterdam, the Grand, opening as a Sofitel Legend in June 2011, and centred around the city's former Council Chamber and Chambers of Marriage.  The hotel also contains the only raw bar in Amsterdam and is within walking distance of the Van Gogh Museum, Royal Palace and Anne Frank's House.

Towards the end of the year the Sofitel Cartagena Santa Clara (Colombia) will  open as a Sofitel Legend property, a hotel of significant historical interest.  Originally built as a monastery in 1621 it is a landmark within Cartagena's walled city, an area declared a UNESCO World Heritage Site in 1984.  The monastery was transformed by Sofitel into a luxury hotel in 1995 and is one of Colombia's most iconic hotels.  It contains both Colonial and Republican-style architecture, the hotel walls once acting as part of the defensive structure of the city.  Cartagena sits on the Caribbean north east coast of Colombia and is a popular cruise port. www.sofitel-legend.com