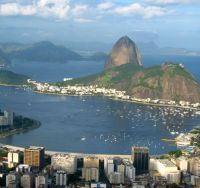 Following what is becoming a rush after a trend Lufthansa is adding Rio de Janeiro at the start of the winter season, later this year.  The airline joins amongst others whose 2011 plans include British Airways to Buenos Aires, Iberia to Fortaleza and Recife and KLM to Sao Paulo.

The new non-stop service from Frankfurt will be launched on 30 October 2011.  Flights will be operated five times weekly with an Airbus A340 configured with 221 seats in a three-class layout with eight passengers in First Class, 48 Business Class, and 165 Economy Class.  Flight time is around 12 hours.  Rio de Janeiro is one of the venues for the 2014 World Cup in Brazil and will also host the Summer Olympics in 2016.  The airline had previously flown to Rio from 1956 until 2005.

Lufthansa is now significantly expanding its services to the region and from next winter will offer 76 flights per week to five destinations in South America.  That compares with 42 flights to three destinations in 2007.  The new route will complement Lufthansa’s existing services from Frankfurt and Munich to Sao Paolo. www.lufthansa.com