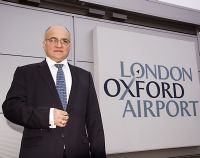 Perhaps better known historically for its professional pilot training (Willie Walsh gained his pilot's licence at the airport, ab initio flying still representing 56% the airport's movements) Oxford Airport will this summer host scheduled flights to Mallorca as well as the established Jersey services.  With its location close by both the M40 and the meeting point of the A34, A40 and A44 it is an easy alternative to Birmingham.

New Airport Director Chris Orphanou said “Oxford has already made its mark in business aviation and is now attracting interest for niche, shuttle-style regional commercial flights.  The airport has supportive investors and mature development plans”.  Mr Orphanou replaces Steve Jones who departed at the end of 2010 for a new role as General Manager at Al Bateen Executive Airport in Abu Dhabi.

A 4,440m2 (47,800sq ft) hangar was constructed on the south side of the main airport site during 2010 and there are plans for another major hangar (55,000sq ft) to be constructed during 2011.  Oxford points out that it is one of only two General Aviation/Business Aviation airports in the UK with full DEFRA approval for the importation of domestic pets.  Owners of dogs, cats and ferrets can transport their pets on flights into the airport from overseas under the Pet Travel Scheme (PETS). www.oxfordairport.co.uk