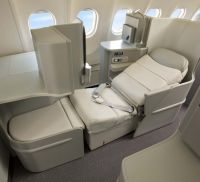 Rome is to be connected with direct flights to the two main Chinese cities, Beijing, the political capital and Shanghai, the economic centre.  Whilst codeshares are nothing new, this arrangement between Alitalia and China Eastern, is somewhat unique with one airline operating one city pair, and its partner carrier the other.  Alitalia is a member of Skyteam and it is planned that China Eastern will join this year.

During summer 2011, China Eastern will introduce flights between Shanghai and Rome.  There will be four weekly services operated with an Airbus A340 in a three-class configuration.

On 1 June Alitalia will start a four times weekly schedule (five starting in October) between Rome and Beijing.  This will be flown by an Airbus A330 in a similar layout.

Thanks to these new services, Alitalia will strengthen its operations in the Far East (where the company today is the only carrier offering a direct service between Italy and Japan) and China Eastern will launch its operations on the Italian market. www.chinaeastern.co.uk www.alitalia.com