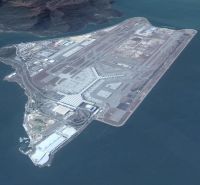 Virtually straight from London, where he criticised the UK Government, IATA Director Giovanni Bisignani, was raising much the same topic at the Aerospace Forum Asia in Hong Kong last week.  This time his target was the authorities governing the special administrative zone of China.  He called on them to move forward with plans for a third runway at Hong Kong International Airport.

“Hong Kong outperforms its population size on the world stage because of its connectivity.  That drives the economy and creates jobs.  The current two runways are near saturation."

Hong Kong International Airport was planned in 1992 to handle 87m passengers and 9m tonnes of cargo.  Growth has been faster than anyone could have predicted.  At the same time, the 60 movements per hour cap limits capacity to much less than this.  Even raising runway movements to 68 per hour as proposed by the Civil Aviation Department, capacity will only be 55m passengers.  In 2010, the airport handled 51m passengers so it is already operating at about 90% of capacity.‬

“If Hong Kong wants to continue to gain the economic benefits of a growing aviation industry a third runway will be needed,” said Bisignani. www.hongkongairport.com