IATA's Bisignani signs off outspoken as ever 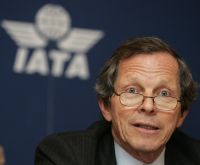 In an outspoken speech to the Aviation Club in London last week Giovanni Bisignani, IATA’s retiring (he hands over at the planned Cairo AGM in June) Director General and CEO called on the British Government to improve its competitiveness in air transport by taking a global approach to aviation and climate change, reducing taxes, changing the economic regulatory structure for airports, and developing a proper strategy to safeguard the economic benefits of aviation.

Bisignani criticized the UK administration for taking an isolated and punitive policy approach to managing aviation’s emissions, particularly with the Air Passenger Duty now standing as a £2.7bn burden on the industry.  “That is enough to offset all of UK emissions – not once, but four times.”

The airports came in for criticism too.  Firstly on their charges.  “Recent decisions have got it all wrong.  While the global airline industry was cutting costs and improving efficiencies to survive, the regulator allowed BAA a 50% increase for Heathrow charges,” he said.

And then on to more mundane but still vital matters.  “Shovelling snow is not the airline’s responsibility,” he said pointing out that Montreal had two metres of snow, and did not close for a single day.  Bisignani will be missed. www.iata.org