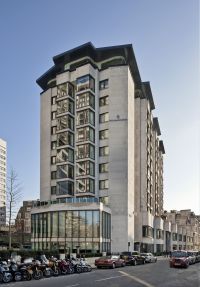 After a 28-month multi-million pound rebuilding programme the Four Seasons Park Lane, once Inn on the Park, has (softly) re-opened.  Lead architects for the whole project, ReardonSmith, said that they are highly satisfied with what became an intense assignment.  “It was the first time that the building had been entirely stripped back to its structure since construction some 40 years ago, a task that had become necessary to facilitate a major up-grading of all services, but which also enabled the re-planning of virtually every part of the hotel.”

In the eight accommodation floors, there are 192 guestrooms of which 53 incorporate a large, modern wet room rather than a conventional bathroom with tub.  The percentage of suites is significant.  Before the rebuilding, there were 20; ReardonSmith’s scheme has achieved 45 flexible one-, two-and three-bedrooms offerings to accommodate different permutations, all of them configured to maximise views.

Some of the suites have working fireplaces and unforgettable views of Hyde Park.  The 12 Conservatory Suites have quite exceptional garden terraces and others have a full-height curving glass wall achieved by integrating the existing balcony space into the room offering a bird’s eye view of Park Lane. www.fourseasons.com/london