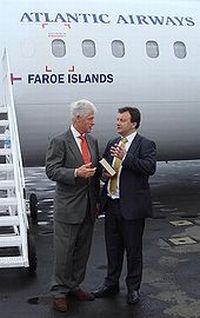 Atlantic Airways, the flag carrier for the Faroe Islands, will again be operating a twice weekly service from the islands tiny airport to Stansted from June to August this year, plus a special service over Easter.  Flight time in a BAe/Avro 146/RJ is just two hours.

Atlantic Airways was founded in 1987 and began operating scheduled flights in 1988.  The 2011 schedule includes Copenhagen (up to four times daily), Aalborg, Billund, Stavanger, Reykjavik and the summer time only Stansted route.  It also operates local helicopter services within the 18 Faroe Islands.

Passengers from the UK land at Vagar Airport, built during World War II by British military personnel stationed on the islands as part of the UK's "friendly occupation". https://www.atlantic.fo