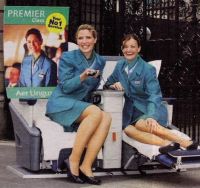 Aer Lingus passengers should be aware that disruptions are likely to occur over the airline's network this week as weekend talks between the airline and its cabin staff union have failed to resolve an ongoing situation with the cancelation of about 10% of services during the last fortnight.

Almost 300 cabin crew have been removed from the payroll and disciplinary measures, which could result in staff being sacked, are still taking place.  The staff are protesting about cost cutting measures and a change of the roster system

The increasingly acrimonious dispute is being played out in the media with the airline saying that all ongoing matters were settled late last year, whilst the union is claiming that Aer Lingus is suffering during the strikes with passengers turning to other carriers and expensive aircraft wet leased in. www.aerlingus.com