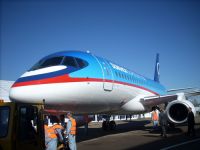 Sukhoi’s Superjet 100, a joint Russian/Italian competitor to the Embraer E series and Bombardier CRJ aircraft, has received type certification from the Moscow-based IAC AR, the Russian certification authority.  Armenian Armavia will receive the first two aircraft, followed by Aeroflot, which has ordered a total of 30 with an option for 15 more.

A formal announcement is planned for later this week when the delivery schedule is expected to be announced.  Alenia Aeronautica, a Finmeccanica subsidiary, is a major investor into the company.

The Sukhoi Superjet 100 made its maiden flight in May 2008.  It was initially mooted in the early 1990s as the Russian Regional Jet and is the first commercial aircraft designed and produced by an organisation noted for its high performance military aircraft.  It is available in various sizes from 75-95 seats and is powered by a pair of PowerJet SaM146 turbofan engines developed in conjunction with SNECMA.  The aircraft have been designed with a view to certification for London City Airport.  Four and five abreast layouts are available. www.superjetinternational.com