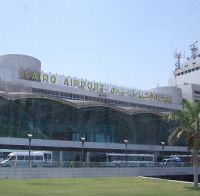 Egyptian flights, particularly to Cairo, are causing concern at the present time as the situation deteriorates in Africa’s largest city.  Some European airlines modified their schedules on Friday, cancelling some flights, all due to the curfew in Cairo, which although not enforced would have an effect on ground travel for both passengers and crew.

British Airways, now part of International Airlines Group, postponed its daily service from London to Cairo on Friday because of the curfew.  The airline offered hotel accommodation to stranded passengers.  BA's operations to and from the Egyptian resort of Sharm el-Sheikh continue as normal.  British Midland are due to operate today, but to a new timetable.

Delta Air Lines suspended service to Cairo indefinitely.  A Lufthansa spokesman said the German airline had cancelled one flight due to leave Cairo for Frankfurt on Saturday morning because of the curfew.

Air France has changed its schedule for flights to Cairo so that aircraft land and take off to avoid the curfew hours, a spokeswoman for the airline said.  One flight was cancelled on Saturday but otherwise it was business as usual until further notice, she said.

AERBT would remind readers to check their airline website and if possible that of the airport.  However this site was down as of midnight Sunday GMT. www.cairo-airport.com