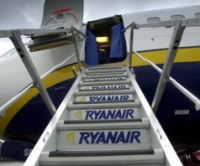 Ryanair, in what is seen as something of a climb-down, has returned to Manchester Airport in quite a big way.  Fifteen months ago it pulled all its routes with the exception of Dublin, claiming that the airport charges were making them unsustainable.

It was Mr O’Leary himself who returned last week to front a press conference confirming daily services to Madrid, a first for the airport, with 14 April set for the inaugural flight.  Also being introduced at the same time are services to Alicante, Faro and Tenerife.  Frequencies to Dublin go up from four to six flights daily.  With the exception of Madrid all the routes face competition from other low cost airlines.  At the same time Ryanair also announced a new twice weekly service from Humberside Airport to Alicante starting from 12 April. www.ryanair.com www.manchesterairport.co.uk