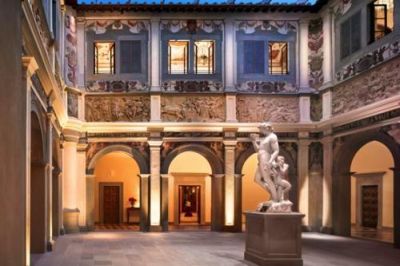 The introduction last week of a daily (except Saturday) service by CityJet to Florence from London City Airport is expected to open up one of Europe’s most fascinating cities not for only those who now habitually use the docklands airport, but with the airline’s new flight connections service also for passengers from Dublin, Edinburgh and Scandinavia.

The great advantage at the Italian end is that Florence Airport is just on the outskirts of what is not a very large city (350,00 population), a 20-minute taxi ride to the centre.  The airport reflects the size of the metropolis and is small and user friendly. 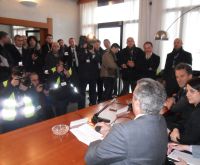 With one or two exceptions Florence is without any multi-national branded hotels, and most of the properties are relatively small in the Italian tradition.  The inaugural party stayed at the two-year-old Four Seasons, an amazing 116-individual suite property 15 minutes stroll from the main downtown area and sited in an 11-acre park.  Built around the vestiges of two adjoining Renaissance palaces it is worth a visit on its own.

Florence has been an UNESCO World Heritage site since 1982.  Tradition has it that it was established by Julius Caesar in 59 BC but it is probably far, far older.  In 774 the city and Tuscany was conquered by Charlemagne.  From about the start of the second millennium its golden age began to emerge.  In 1301, Dante was sent into exile from here (commemorated by a plaque on one of the walls of the Uffizi).  For a time it was one of the richest and wealthiest of European cities, a Republic with republican virtues.  The Medici family emerged as patrons of the arts commissioning works by Michelangelo, Leonardo da Vinci and Botticelli.  What you see today is the result of competition between various families and hierarchies in trying to build the biggest and best.  For a short time (1865-1870) it was the capital of the Kingdom of Italy. 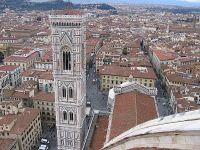 One of the problems at the present time is that Florence does not have a visitors card covering all the major museums which is something the excellent local tourist board is working on.  Our recommendation is to take one of the two competing open top hop-on hop-off bus tours when first arriving in order to get a feel for the place.  The local guides and foot tours are excellent with fine English and a deep knowledge of the city’s fascinating history.  One can hire a bike and for those a little more adventurous, a Segway.  The state run museums offer free admission for those over 65 but you do need to show a passport.  If you are visiting in the summer try and book your museum visit in advance.  The place gets very busy.

The Palazzo Vecchio is the town hall of Florence.  This massive, gothic fortress-palace is impressive overlooking the Piazza della Signoria with its 100-year-old copy of Michelangelo’s famous David statue as well as the gallery of statues in the adjacent Loggia dei Lanzi.  It is one of the most significant public places in Italy.  The actual David itself is housed in the Accademia dell'Arte del Disegno, founded in 1561 with patronage of the Medici by Giorgio Vasari, Agnolo Bronzino and Bartolommeo Ammannati, three of the central artists of Mannerism. 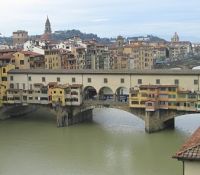 Michelangelo was born in Florence and produced his early work in the city.  At the age of 21, and with the end of the Medici era, he was financially persuaded to move to Rome.  He died their after a long and productive life in 1564 aged 89 and whilst that city wished to offer itself as his final resting place his wishes were fulfilled and he is buried in the Basilica di Santa Croce (Basilica of the Holy Cross), the principal Franciscan church of Florence.  It lies to the east of the central area close by the National Library, another magnificent building but dating only from 1935.

Another name know to many in the 21st century from even before Michelangelo is Niccolò Machiavelli, whose prescriptions for Florence's regeneration under strong leadership have often been seen as a legitimization of political expediency and even malpractice. Commissioned by the Medici, Machiavelli also wrote the Florentine Histories, the history of the city.  He lived from 1469 to 1527.

The Uffizi Gallery is one of the oldest and most famous art museums in the world.  In 1560, Giorgio Vasari built the palace for Cosimo I de' Medici as the offices for the Florentine magistrates.

The massive cathedral church, called the Duomo, was begun in 1296 but its elaborate neo-Gothic façade was not added until towards the end of the 19th century.  The adjoining bell tower offers an unique view of the city and the surroundings.  There is usually a long queue and it has 414 steps. 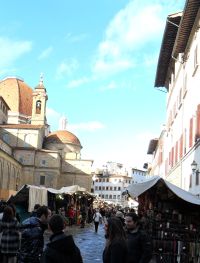 At the heart of the city, in Piazza della Signoria, is Bartolomeo Ammanati's Fountain of Neptune (1563–1565), which is a masterpiece of marble sculpture at the terminus of a still-functioning Roman aqueduct.

Florence is the city of Gucci and for shoppers it is heaven starting at the market of San Lorenzo.  Eating is another popular Italian occupation and here the choice is vast.  However you dine it needs a Chianti.

In a short review it is impossible to mention everything regarding this iconic city, suffice to say that all the following either lived within its environs or were closely involved.  Boccaccio, Botticelli, Brunelleschi, Roberto Cavalli, Dante, Donatello, Galileoi, Guccio Gucci, Machiavelli, Catherine de' Medici, Michelangelo and Emilio Pucci.  And many others too.  Building after building has its connections.  Four nights is really needed and there is the rest of Tuscany to visit too.