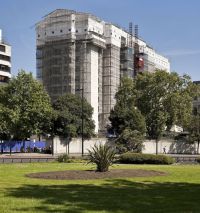 Four Seasons, the Canadian hotel and resort group, is currently focusing much on London, with a major opening and the announcement of what will probably be the largest hotel in the City of London.

The much anticipated re-opening of Four Seasons Park Lane has now been set for 31 January.  The 192-suite 5-star property includes 53 rooms providing a large wet room rather than a bathroom with tub.  There are 20 Conservatory Suites with four over looking Hyde Park, each with a garden terrace.

At Liverpool Street, in the heart of the city, the Four Seasons will form part of the 43-storey Heron Plaza development, now under way next door to the virtually complete Heron Tower.  190 hotel suites and 120 Four Seasons-branded residences, as well as restaurants, conference and banqueting facilities, a gym, spa and swimming pool will be provided.

Four Seasons has also been represented in Canary Wharf since the early 1990s the 142-suite property the only hotel in the central complex. www.fourseasons.com