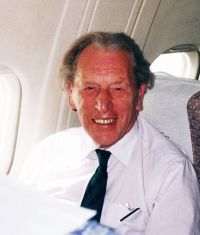 Reg Ward, one of the men chiefly responsible for the creation of London City Airport, has died aged 82.  Mr Ward was Chief Executive of the London Docklands Development Corporation (LDDC) between 1981 and 1987.  It was the body responsible for the regeneration of the Isle of Dogs and the building of Canary Wharf.

"Reg's legacy lies in the transformation of east London – without him, it just would not have happened."

At the LDDC, Ward was responsible for the idea of the Docklands Light Railway, London City Airport, Canary Wharf and was consulted by Iain Shearer for the ExCeL Exhibition Centre.  His forthright style did not sit well with his colleagues in central government and he was eased out of the job shortly after the deal on Canary Wharf was signed.  However, he is now viewed as the main driver behind the extraordinary change and development in London Docklands.  Unlike many others (sometimes tax exiles) who created a lot less, Reg never received national honours, a fact that failed to rankle him, but annoyed his former close colleagues. www.lcacc.org/history