ON TOUR: You can still fly across the water 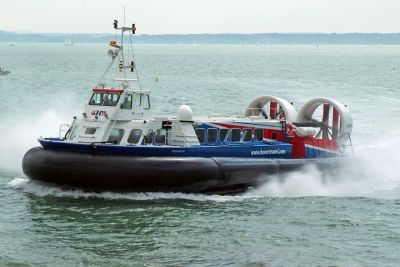 How quickly we have forgotten that before the advent of Eurostar in November 1994 the best alternative way across the English Channel was by hovercraft, a fast (maximum 75mph ) waterborne surface skimmer that took less than 30 minutes between Dover and Calais.  The special ramp in Dover Harbour still remains.

It may surprise many but you can still travel on a scheduled hovercraft service in Europe, admittedly on a very short ‘flight’.  The service, launched in 1965, is the world’s longest running commercial hovercraft operation.  Linking Portsmouth and Ryde on the Isle of Wight the journey is just ten minutes, a Solent rule limiting the speed to 45 knots rather than the 65 maximum the hovercraft is capable of achieving.

In truth the Channel route between England and France could not sustain four forms of transport (hovercraft, train, traditional ferry and catamaran), five if you include the aeroplane.  Strangely enough one of the economic factors that destroyed the economics of the hovercraft operation was the withdrawal of Duty Free by the EU on the route, previously a strong money earner.

Hovercraft have been used by the military over the years with some degree of success, very large machines by both the Russians and Greeks, and what are termed air cushioned landing craft by the American and British armed forces.

The word hovercraft will always be associated with Sir Christopher Cockerell, one of a whole series of brilliant British engineers who made their mark during and after the Second World War including Sir Frank Whittle, Sir Barnes Wallis and Sir George Edwards.  His invention of the hover principal culminated with the four-man SR-N1 which made an English Channel crossing in July 1959 proving the principal of what is an air cushion machine.

The advantage of the hovercraft is that it can be waterborne at extremely low tides.  If it hadn't been for the tides hovertravel might never have existed.  The low tides at Ryde take the sea out far beyond the town's esplanade, and it has always been impossible for any ship to berth anywhere near roads or bus routes.  Until 1965, the only passenger ferries from Portsmouth stopped at the end of Ryde’s third of a mile long pier.

With more than 25m passenger journeys achieved since its inauguration, Hovertravel now carries an average of 70,000 passengers per month.  Hovertravel is also a freight operator and Royal Mail has used the hovercraft to carry post to the island since 1980.

The Hovertravel terminals are located at Quay Road in Ryde and Clarence Esplanade in Southsea.  The service takes under ten minutes and runs every half an hour between 06:15 and 20:30, with a 15-minute service operating at peak hours.  Hovertravel also operates a somewhat misnamed Hoverbus between the Southsea terminal and Gunwharf Quays/Portsmouth mainline rail station which takes just four minutes.

Hovertravel have two craft: Freedom 90 is of the API-88/100S designs, but the BHT130 Solent Express, introduced in 2007, which marks one of Hovertravel's most significant achievements, being the first model to be entirely designed and built by sister company Hoverwork (now called Griffon Hoverwork Ltd).  The BHT130 weighs 75 tonnes and carries 130 passengers.  Don’t expect any luxury or even a loo.  After all it is only a 600 second journey.  And once you are off the device at Ryde it is easy to find your way onto another form of transport you probably did not know existed.  A 1938 London Underground train.  But that’s another story! www.hovertravel.co.uk www.southwesttrains.co.uk/island-line.aspx