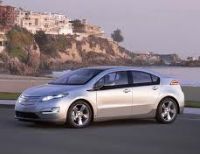 The British ultra-low carbon car market has received a boost with the announcement by Government of the first set of vehicles eligible for the new ‘Plug-In Car Grant’.  Transport Secretary Philip Hammond and Business Minister Mark Prisk set out details for the incentive and announced the UK locations that will receive funding in the second round of ‘Plugged-In Places’.

From 1 January 2011, motorists will be entitled to a Plug-In Car Grant of up to £5,000 when buying any qualifying low carbon car with CO2 emissions less than 75g/km.

Available now are the Mitsubishi i-MiEV, Smart for two electric drive and Peugeot iOn.  Early next year the Nissan Leaf, Tata Vista and Citroen CZero arrive.  In 2012 they will be joined by the Vauxhall Ampera, Toyota Prius Plug-in Hybrid and Chevrolet Volt.

The announcement also detailed the five successful areas that bid for Plugged-In Places funding.  The Midlands, Greater Manchester, East of England, Scotland and Northern Ireland will share £20m to further the development of the ultra-low carbon infrastructure, installing 4,000 more charging points.  These new zones join round one winners London, Milton Keynes and North East England that will install over 11,000 charging posts across the three regions by 2013. www.smmt.co.uk/publications www.dft.gov.uk/pgr/sustainable/olev