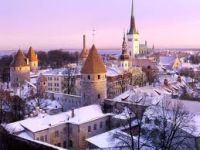 On the 1 January 1 2011 Estonia becoming the latest country to adopt the Euro.  How the problems of Greece and Ireland affect its arrival remains to be seen, the change of currency planned for some time.

Coinciding with the new financial arrangements Tallinn, the capital, joins with Turku (Finland), as one of the two European Capitals of Culture next year.

To welcome the Capital of Culture year the city will host an opening ceremony and music festival, centred around Theatre Square on 31 December with fireworks at midnight, lighting up the city's coastal location, the port a popular summer cruise destination.