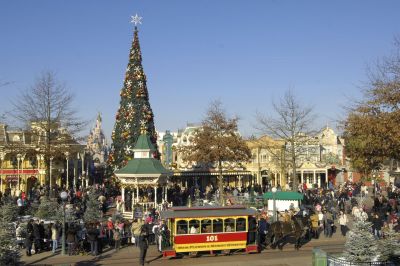 If you are thinking of a family trip next spring or summer Disneyland Paris is to be highly recommended.  Yes it is in one sense very ‘plastic’ but it can be combined with an opportunity to use Eurostar, visit the capital of France and pick up some culture, and make the most of the chance to utilize the French being taught at school.

It is fully open over Christmas and the New Year too, with some excellent special attractions closing at one in the morning on 1 January. 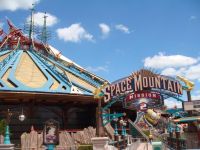 Since its opening in 1992, Disneyland Paris has established itself as the leading tourist destination in Europe, welcoming more than 215 million visits.

Disneyland does not have to be expensive and in fact the park entrance fee is good value when, for instance, compared to 90 minutes at a Premier Division soccer match.  Booked well in advance Eurostar is also realistically priced and (except for the Disneyland Hotel sited at the entrance) the hotel costs are reasonable.  AERBT stayed at the Radisson Blu with a courtesy bus service, a fine breakfast and internet included in the package plus an indoor swimming pool.  Paris is an easy RER ride away with its attractions and can be in itself part of the trip.  Visitors choosing to come by car will find countless lodging offerings at all price ranges.

Eating in the park can be very expensive.  These days Disney does allow one to bring your own food and provides plenty of covered space for informal consumption.  The many food outlets provide wholesome grub in quantity (and some fine dining too if you look for it).

Once you have paid for your travel, accommodation and entrance you need not spend another penny.  But that will be something of a struggle. 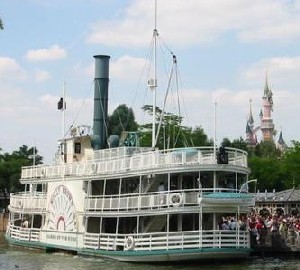 We travelled via Kings Cross/St Pancras and Eurostar direct to the park.  There is a daily service (also from Ashford – Kent) except Tuesdays and Saturdays outside of school breaks, or you can tailor your journey via Lille.  Station to station it is 2hrs 35mins London to Disneyland and the park itself greets you on arrival.  If you don’t speak French most of the staff are multi-lingual.  Don’t worry about your luggage.  The hotels will collect it at the station and offer the same service for the return

Disney at Paris is two adjoining theme parks connected by an eating area and other leisure activities called the Disney Village.  You can view the whole scenario by taking a ride in a tethered balloon.  The Disneyland Park itself is recommended for a minimum of 1½ days and the Walt Disney Studio Park for a half day.  Two nights minimum. 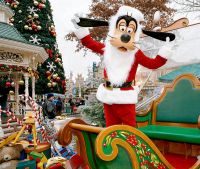 Someone a long time ago coined the expression “The Magic Kingdom” and it certainly is, for youngsters from five upwards (with the record age for a visitor of 106).  It is best to keep away from the French school holidays when the queues can be horrendous.  For some of the more popular rides you can sign up early in the day with “Fast Pass” and then come back at your allotted time.  Patience is the one virtue that is required at Disneyland and getting your timing right.  It is perfect for children.  If you are really tired take the Disneyland Railroad and stay on for a second circuit.  Don’t try and get on at the Town Square station, the more distant stations are less busy.

Arriving at Disneyland Park wander down Main Street and get in the mood for the place.  You may be lucky and there is a parade going on.  Mickey, Minnie and their friends will be around to entertain you.  Make your way to the Central Plaza and then decide.  Your choice is Adventureland, Frontierland, Fantasyland and Discoveryland.  The names more or less described what they offer.

Adventureland is just that, and is clearly for the most part designed for the more thrill engaged types and those who with some rides (Indiana Jones) should not wear toupees or indeed enjoy upside down trips.

Frontierland includes “Big Thunder Mountain” and a leisurely ride on a massive sternwheeler across the Disneyland lake. 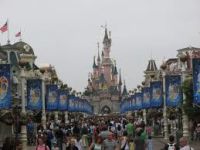 For the younger people Fantasyland includes “Peter Pan’s Flight” and the ever popular “It’s a Small World”.  “Le Theatre du Chateau” is a good place to sit down.  Look in the programme for the show times.  You will not have a language problem.

Finally “Discoveryland” has the ever popular “Space Mountain”, a chance to drive your own car in “Autopia” and “Star Wars” a space flight simulator for an intergalactic excursion into the Star Wars galaxy.

The park normally opens at 10:00 and goes on (in the summer months) until 23:00 and sometimes later.  Not so the Walt Disney Studios which closes much earlier.

Without doubt the best offering at the studios is the “Back Lot Studio Tram Tour” a fascinating trip showing just how some of the great films of the past were made in the days before digital production.  It can get hot in places and it is easy to get splashed.  The “Back Lot” is full of surprises.

If it is stunt driving you want to see the “Motours” spectacular is a 45-minute show in a specially built stadium.  And yes you will be caught out in the way it is done. 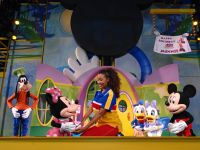 The Walt Disney Studios is once again divided into theme areas, but the walking is much less and there is plenty of time to relax in the “Animagic” show where a host of Disney characters produce a host of songs from unforgettable films since Snow White and the Seven Dwarfs of 1937.  Produced today it would probably be banned as politically incorrect.

If none of this is for you but family commitments insist on a visit there is the Disney Golf Course which adjoins the Radisson Blu hotel!  It is of championship standard and combines three 9-hole courses that can be combined into a serious 18-hole par 72 challenge. www.disneylandparis.co.uk