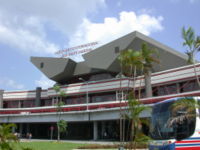 US citizens travelling to Cuba are very much on the up and are said to top 1,000 per day.  US charter companies flying to the Communist-ruled island say business has boomed since President Barack Obama's administration lifted restrictions last year on Cuban-Americans visiting their homeland, and also loosened curbs on academic, religious, cultural and other professional travel.

US citizens are forbidden from travelling to Cuba without their government's permission under a wide-ranging US trade embargo on the island imposed nearly five decades ago.

Cuban tourism industry sources said more and more US citizens or Cuba-bound travellers from the United States were also arriving through third countries such as Mexico and the Bahamas to get around the US travel ban, avoid licensing hassles, or simply because it is the less expensive route.

There are no regular scheduled commercial flights between Cuba and the United States which lie less than an hour's flight apart, separated by the Florida Straits.  "We estimate the total (visitors from the US to Cuba) for the year will be more than 400,000," a US State Department source said, asking his name not be used due to restrictions on talking to journalists. www.dot.gov