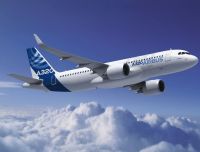 Named the A320neo, Airbus has copied a Boeing move from the mid-1990s with the announcement of a revised A320 series aircraft with two new engine offerings.  The difference between the then Boeing NG (New Generation) offering is that Airbus says it will continue with the existing engine/aircraft arrangement subject to orders.

The company claims the A320neo will not only deliver significant fuel savings of up to 15%, which represents up to 3,600 tonnes of CO2 savings annually per A320neo. In addition, A320neo customers will benefit from a double-digit reduction in NOx emissions, reduced engine noise, lower operating costs and up to 500nm (950 km) more range or two tonnes more payload. www.airbus.com