New Audi A7 Sportback is Ace! 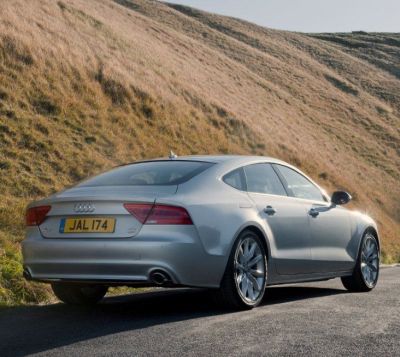 Audi’s pace-setting new car programme is a demonstration of how to generate product desire regardless of the world’s economic situation, this resourceful car manufacturer pitching right across the premium car market in so many sectors that it has become challenging for me to choose a personal favourite example.

That’s until Audi produced this latest ace out of the pack – the Audi A7 Sportback – a car that I suggest will knock many affluent buyers off their feet!

Here, is a car that does not stand still, even when parked, it is swish, sleek, the flowing lines I would say almost feline, the classic lines captivating admiration during my driving session.  There are some tremendously good looking Audis but I think this is the best yet!

The concept is that of a supremely spacious, four-seat executive class comfort ability, more than acceptable load carrier with a performance CV that indicates fine art rather than macho but in reality has the design, build and mechanical power to deliver great satisfaction .

At launch the new Audi A7 Sportback will be available to order with two V6 petrol 2.7/3.0 engines and two 3.0 V6 turbo diesel engines in two power outputs and with lower priced variants using front wheel drive as well as the notable all wheel drive quattro transmission driving (according to variant) through either a CVT automatic transmission or a seven-speed S tronic twin-clutch transmission on the all wheel drive versions.

There are two specification levels SE and S line with prices starting at £43,755 but that is before one starts to create, at the order stage, a bespoke car (there are no off-the peg models in this programme).  It is easy to add about another £10,000 of extras that can range from an amazing ‘Audi first’ Google see round the corner view satellite navigation system at nearly £1,200, via oad facility with removable ski/snowboards bag at £210, to a BOSE surround system and plenty more.

Create your own car and wait, at the time of writing, until sometime in 2011 for delivery as Audi’s production capacity is fully stretched clearly proving the success of the product range.

With the A7 Sportback Audi has continued development of its weight/strength body building programme by utilising aluminium in variable densities/mouldings according to the loads placed on a particular component.

At launch I have driven versions powered by the V6 turbo diesel engine and, to a greater degree, this 2.7 T FSI quattro SE S Tronic petrol version that checked out at nearly £58,000 following the addition of some of the afore mentioned extras plus sports suspension.  Think it, they can probably include it!

For driving performance I found it the velvet glove of motoring, the V6 179 bhp engine so refined, so flexible (the diesel too) that it purred along but when required could unleash a mass of driver enjoyment under the right circumstances as the transmission sparked into action when commanded by my right foot or tempered things in extreme safety under the highly efficient braking system.

Relax a little, use the speed control and selectable driving mode or just keep an eye on the face up (not fitted on this car but available) information projected on the windscreen.  Take for granted the (cost extra) support of the powered with memory adjustable seating, hardly notice the way the well honed suspension dealt with varying road surfaces for both the ultimate grip provided by the all wheel drive transmission that is easily smoothed out the imperfections in the road surface.

Be confident that your passengers will be relaxed in the excellent accommodation provided and that they have not had to be subjected to ‘just hand luggage’ in the commodious 535 litre luggage space, the hatch of which is touch operated, the rear shelf hinged in unison with the large tailgate and even the support struts smartly sheathed rather than the bare metal piston devices usually on show in other hatch back cars.

Believe me driving or travelling in this ace from Audi is a journey of discovery, perhaps a new beginning for a driver jaded by the repetitious ordinary character offered by some costly cars that have perhaps rested on their laurels for a bit too long.

Having observed at first hand the progress of the Audi marque from an originally hard to notice product to a major player in virtually every form of motor car I can be accused of taking for granted the fine build quality, the smart but tasteful trim, the excellent build quality and the sensible planning that is clearly in evidence that I can only suggest that those who are yet to be enlightened and have the resources are short changing themselves if they don’t find out pretty quick.

You want performance with refinement?  You have got it here!  Top speed is claimed 146 mph with 62 mph (100 kph) reached in a mere 8.3 seconds while on the combined cycle 35.3 mpg has been posted, so this should be a
30 mpg potential for what is a heck of a lot of car.  Wallow perhaps that the folding rear spoiler, developed from the iconic Audi TT, reveals itself in James Bond manner at speeds over 70 mph.

Keep and eye on your back by the rear view camera that also keeps operating to show a rear view as you move off forwards… as if an Audi driver would forget to check the rear view mirror!

With 12 more new models forecast for 2011 it is evident that Audi has not only arrived on the big scene but ownership is a major ‘must have’ accoutrement for those enjoying success in life.

BEAULIEU: Events at the National Motor Museum in 2011 will include a parade of classic cars on 2 May and a rally of Bentley cars on 8 May. www.beaulieuevents.co.uk

LAND ROVER: A special edition 500 run of a Land Rover Freeleander 2 has been launched at Bologna Motor Show.  Powered by a 1.8 litre 189 bhp diesel engine with 6-speed automatic, it is offered in exclusive colours priced from £33,945.

SUBARU: Towing tips are being offered to owners of Subaru all wheel drive vehicles. www.subaru.co.uk

VOLKSWAGEN has overtaken Ford as the UK’s largest supplier of motor vehicles.  However it is the Volkswagen Group that holds the title rather than VW itself.  Bentley today is part of VW Group as is Audi, Seat and Skoda.  Ford can claim all the glory still leading as a stand alone marque, the Fiesta and Focus models Britain’s biggest sellers.