ON TOUR: Ecuador "The centre of the earth"

What does the name Ecuador mean and where are the Galapagos? 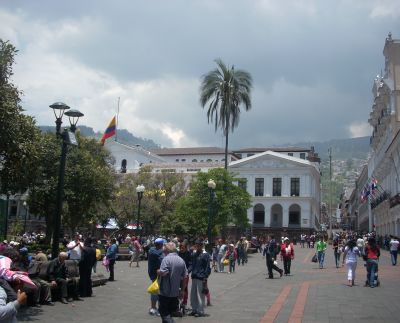 The translation of Ecuador in simple terms means “the centre of the earth”, the country claiming that its highest mountain, the inactive volcano Chimborazo at 21,000ft, is further from the world’s core than Everest.  In English “on the Equator” would be an easier explanation.  The Galapagos, explored by Charles Darwin in 1835, are a group of islands 500 miles off the coast and are the subject of part two of this discourse.

I flew to the Ecuador capital Quito via Houston on Continental Airlines, a highly recommended routing.  The American immigration and customs were no problem and a very late evening collection at Quito International Airport was organised by one of South America’s largest holiday organisers Metropolitan Touring for which there cannot be enough praise.  They were terrific over 14 days. 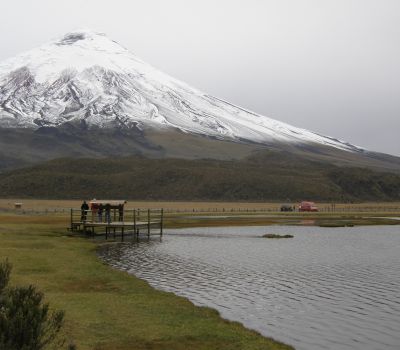 Visitors need to know that with its location the sun rises every day in Ecuador at 06:00 and goes down at 18:30.  There are no seasons as such (although there is a rainy period) and Quito itself is 9,000ft above sea level.  The highest point of the whole trip touched 15,000ft, about the same as Mt Blanc.  A coat was not essential at that height although most sea level dwellers will notice the thin air.  The whole country sings the environmental tune with very little litter around and a noticeable lack of smoking.  The US dollar has been the official currency of the country since 2000 with a meal for two in the excellent Quito Hilton just US$26.  Spanish is the official language but English is widely spoken.

Quito itself dates back to the 15th century and in 1978 became the first UN World Heritage Site.  Ecuador is very much a north to south country with a narrow extremely fertile central strip surrounded by mountains on both sides often called “The Avenue of Volcanoes”.  There is also a slender coastal plain boarding the Pacific and to the east massive Amazon rain forests.  Self-sufficient in food it has huge oil reserves and is one of the world’s largest producers of both roses and bananas.  It is also prone to revolutions and changes of governments with seven Presidents over the last ten years.  During my stay there was a minor resurrection.  People just got on with their lives, normality returning within 48 hours. 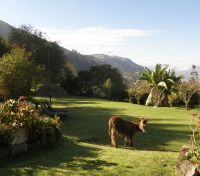 Quito is really two cities, the old and the new, my initial residence, the Patio Andaluz, a fine boutique property very near Independence Plaza and the Presidential Palace, the Municipal Building and the Archbishop’s Palace.  Nearby is The Monastery of San Francisco, one the of great religious buildings of the New World; its impressive façade and atrium that leads to its fine Baroque interior .

After one day to recover from the journey it was along magnificent valleys and mountains to the Cotopaxi National Park and the volcano of the same name.  High-altitude birds were observed around the Limpiopungo Lagoon.  That night our residence was at the Hacienda Manteles, a 300-year old hacienda, hidden among the mountains.  Magical.

Then it was south once more along narrow mountain roads following the gorge of the Pastaza River, more or less parallel with the Pan American Highway (which is far from a highway in parts).

There is art to be seen, old railway stations to be visited, and a gorge to be crossed by cable car.  The Inca Fortress of Ingapirca is a reminder that parts of South America were home to advanced civilisations well before the Spanish arrived.  More volcanoes. 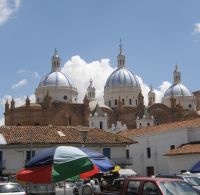 After three fairly tiring but exhilarating days on the road we eventually arrived in the south of Ecuador at Cuenca the country’s third largest city and captivating.  Its red tiled roofs, cobblestone streets, flowery plazas and museums make it very special.  From an early dinner one felt quite safe to walk through the streets to another spotless boutique property, Hotel Carvallo.

It was back to Quito by ‘plane for two more nights in the city.

An early rise and up into the mountains again for a dramatic day that finished at La Mirage Garden Hotel & Spa, the first Relais & Chateaux property in South America.  Horse riding is one of the activities on offer.  The property is near the small town of Cotacachi, dedicated to the production and sale of leather goods: coats, belts and all kinds of handbags.  Leave your wife to wander.  Prices are one third of London. 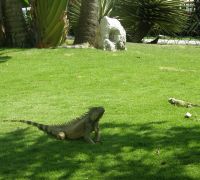 Then it was to Guayaquil, the largest city of Ecuador sitting near the mouth of the River Guayas with its splendid public waterfront walk stretching for 1.5 miles and featuring historical, cultural and entertainment areas.  Just back from the river is Bolívar Park, also called "the park of the iguanas", as here they roam undisturbed and perch on the treetops, blending perfectly with the green leaves.

Seven days at sea in the Galapagos followed (more anon).

Where to finish such an enjoyable trip?  Up in the mountains of course, and not much more than one hour’s drive from Quito.  At 11,000ft above sea level the Papallacta Hotel and Hot Springs is a popular ‘away from it all’ resort on the edge of the Amazon rain forest.  You can water raft or take an adventure trail into the mountains.  With 15 hours of flying due the next day the best thing was to relax in the 80ºF open air pool and then take a superb lunch. www.metropolitan-touring.com