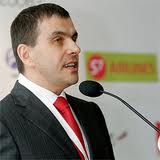 S7 Airlines, Russia’s leading domestic carrier, has today (15 November) officially become a member of the oneworld alliance.  Its subsidiary Globus joined at the same time, as an affiliate member.

S7 and Globus between them serve 90 destinations and 28 countries.  They add 55 destinations in Russia and the Commonwealth of Independent States to the oneworld schedule, and nine countries, in Armenia, Azerbaijan, Georgia, Kazakhstan, Kyrgyzstan, Moldova, Tajikistan, Turkmenistan and Uzbekistan.  This has almost tripled the number of destinations served by oneworld in Russia, the CIS and other parts of East Europe to a total 84 destinations in 26 countries.