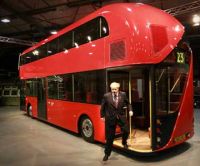 London’s new double-decker bus was unveiled by Mayor Boris Johnson last Thursday.  It is a true successor to the very popular Routemaster with its rear entry deck.

A full-size mock-up of the design revealed a layout that allows passengers to hop on and off.  There are three entrances, two staircases plus panoramic windows, and it will have much more fuel-efficient engines.  With a conductor in place the double-deckers will be far quicker than the hated bendy bus which proved to be unsuitable for London roads.

The model of the so-called New Bus for London (NB4L), displayed at the London Transport Museum’s depot in Acton, has been produced to garner views on the design ahead of a prototype being built next year.  The first five buses are due to hit London streets early in 2012. www.tft.co.uk