ON TOUR: Innovation shines at NBAA 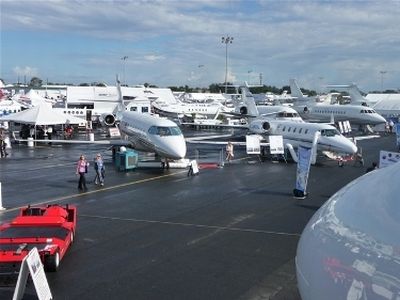 Atlanta, Georgia, is the world’s busiest airport hub.  Home to Delta Airlines, Coca-Cola, CNN, AT&T and this year, NBAA, the industry’s largest business aviation gathering.  The mood at the 63rd annual convention was upbeat with a steady stream of announcements about new aircraft programmes, powerplants and aerodynamic enhancements to trusted favourites.

Bombardier announced two new additions of its Global Express family, the GE 7000 and 8000, stretched versions of its latest XRS to be powered by new GE Tech X engines enabling superior ranges of 7,300 nm and 7,899 nm, respectively, and fast Mach 0.85 and 0.90 cruise speeds.

Bombardier Business Aircraft President Steven Ridolfi stated that 4,500 aircraft in this class will be required within the next 20 years and he is bullish about his company capturing 50% of that share – worth upwards of US$200bn. 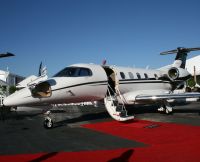 Further, faster was definitely the theme as the business aviation industry takes its lead from the key growth BRIC markets – Brazil, Russia, India and China.  “We have had to learn a lot of new geography,” quipped Gulfstream’s Senior VP Marketing and Sales Larry Flynn at a pre-show gathering to select media for a presentation on the G650.  Straight after NBAA Gulfstream executives flew to Taipei to celebrate service entry of a G550 with Win Air of Taiwan, Taipei’s first business aviation company.

Talk of the show was the 650’s innovative cabin management system by App that sees windows, lighting, seats, inflight entertainment all controlled via iPod touch/iPhone.  It is the intention that all current aircraft in the Gulfstream family will have this i-fly technology and eventually have full onboard internet via their i-pads too.

Hawker Beechcraft unveiled a successor to its Premier II light jet the Hawker 200 and the latest variant to its popular King Air business turboprop family – the 250 – with increased short-field performance that open up a further 1,100 airfields worldwide.

BAe Systems was in Atlanta to promote a new version of “the aircraft that never dies,” joked one US journalist referring to BAe 146/AVRO.

Joining the go-anywhere Explorer One and Explorer Four concepts, BAE presented its new ABJ ‘Fusion’ interior. This one has been designed for the luxury charter market – for product launches, sports teams, musicians, celebrities and corporate VIPs.  Design Q’s Owner/Designer Gary Hoy said the interior, seating 19 passengers and capable of a 1,800 nm range, would be ideal for Los Angeles – Las Vegas sectors.

But what about improving on the rather aged exterior appearance of the aircraft?  BAE confirmed they were in dialogue with winglet specialists Quiet Wing about potentially fitting the aircraft with winglets, not necessarily for aerodynamic reasons, but for a good cosmetic facelift.

BAE’s VP Avro Business Jeta Stewart Cordner highlighted that BAE’s work in the VIP sector is seeing it win more aircraft remarketing contracts.  It announced it is remarketing eight A340-200s and -300s for GMT Global Republic, which previously leased them to major carriers.  Stewart said while these are older aircraft, they are low time and would appeal to governments looking for VVIP versions. 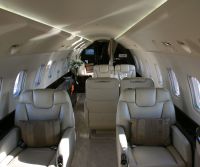 NBAA President and CEO Ed Bolen and Pete Bunce from GAMA (General Aviation Manufacturers Association) talked about their ‘No Plane, No Gain’ business aviation advocacy campaign, announcing three high profile ambassadors – astronaut Neil Armstrong, Arnold Palmer and Warren Buffet are lending their names to it.  “It has been a pretty challenging couple of years for business aviation,” said Ed Bolen.  “By almost any measure, our industry fell 25 to 40% over the past year.  But even in this climate, the people and companies in business aviation continue to seek out effective venues for conducting business, sharing information and networking.”

There was a surprise announcement from US helicopter manufacturer Sikorsky and its backer United Technologies with news it had decided to invest (with an undisclosed sum) to put the VLJ Eclipse and Eclipse Aerospace back into production. 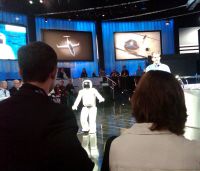 HondaJet’s distinctive looking large cabin light jet HondaJet may be a little delayed with its first flight milestone but the manufacturer was a huge crowd puller with its hourly demonstrations of ASIMO, the world’s most advanced humanoid robot which responded to spoken instructions.  ASIMO can run, walk on uneven slopes and surfaces, turn smoothly, climb stairs, and reach for and grasp objects.  Honda was demonstrating its expertise in innovation to highlight ASIMO's usefulness in the home – especially for elderly and people with special needs.  It has taken ten years to get ASIMO to walk; now the company is working on its artificial intelligence. 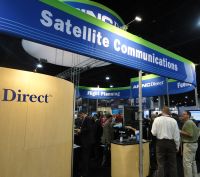 Visitor numbers for the three-day event were 5% up on 2009 at 24,206.  Some 1,038 exhibitors took stands and the static line up at DeKlab Peachree Airport, a 30-minute coach drive away, showcased a record 93 aircraft.

There was something for everyone in the static park, including the Dornier SeaStar float plane set to start production in Canada.  Some 40 orders are already logged.  New models on display included Embraer’s Legacy 650 which rival OEMs were so keen to see, photograph and video, the manufacturer had to implement a no photography ban.  The aircraft obtained EASA and Brazilian certification during the show, paving the way for deliveries from next month.  Among the first is one destined for Stansted and Titan Airways Executive of the UK which is managing the aircraft for a private customer. (AERBT Issue 18 October) www.nbaa.aero