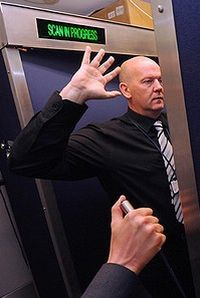 Manchester Airport now has body scanners in use in all its security search areas just 12 months after their provisional introduction.  The airport says there has been  an overwhelmingly positive reception from passengers.

Results of extensive passenger surveys following a voluntary trial in Terminal 2 in October 2009 reveals that over 95% of travellers consistently rate the body scanner process to be a significant improvement on the traditional airport security pat down.  Passengers are allowed to keep their coats, jackets and shoes on.

Body scanners have also slashed security queues.  Replacing personal inspection with this technology has meant a dramatic reduction in the amount of time each passenger spends being security screened.  It makes life easier for the staff too.

Within the first four weeks two female Muslim passengers became the first people to be refused travel after they declined to use the body scanner on religious grounds.  There have since been no refusals and these passengers have since visited the airport to better understand the privacy controls which they told airport staff has allayed their concerns. www.manchesterairport.co.uk