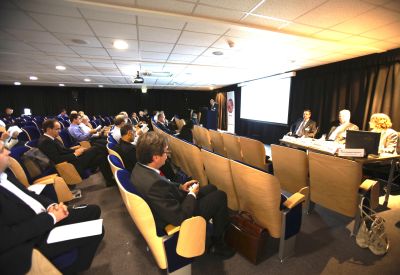 Edwin Brenninkmeyer, CEO of UK-based Oriens Advisors is a busy man.  Not only has he held forth as AERBT’s ON THE SOAPBOX luminary for the month of October but he was very much the star of MIU Events’ 4th annual Light Jets Europe conference held at Oxford Airport.

Speaking to the 100-strong delegates Mr Brenninkmeyer posed the question:

“Will entry level business jets become the future new Business Class?”  He said citing Lufthansa, Swiss, Qatar Airways, Delta and now British Airways’ and its newly announced partnership with CitationAir in the US as its private jet partner.  “It is a feasible and growing new trend among the legacy carriers.”

Also advocating this new business model was Lars Welender from Ventana Aviation, highlighting that passengers are becoming increasingly frustrated with traditional hub and spoke airline services.  Added to that, Business Class services on short haul routes are increasingly being dumbed down as legacy carriers face increasing competition from the low cost carriers, several of whom such as Vueling and Air Berlin are adapting their product to attract more business clientele.  Legacy carriers are being squeezed all round.  They want to keep their premium passengers loyal, so this is an interesting offer for them to explore, delegates heard. 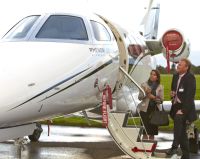 The new generation of light jets (far less expensive than chartering larger private jets) can complement the LCC/legacy/regional carrier matrix and make a real difference to business travellers’ lives.  “One in three marriages ends in divorce,” said Edwin, suggesting that VLJs can play a big part in restoring family life.  It was even voiced that Ryanair may like to look at such an idea for their business travellers who regularly arrive at their remote European airports.  If they can get in to them that is.  For while EBAA advocates the use of secondary airports to further grow business aviation, the restrictive performance of the VLJ is such that many airfields in Europe can’t actually accommodate them, because their runways are too short.

For while EBAA advocates the use of secondary airports to further grow business aviation, the restrictive performance of the VLJ is such that many airfields in Europe can’t actually accommodate them, because their runways are too short.  Very few of the 2,500 small airports in Europe have the facilities and runway length to accommodate these new light jets, with their limited braking systems.  The Cessna Mustang needs at least 4.100ft/1,250 m landing distance if a runway is wet and the Embraer Phenom needs at least 4,750 ft/1,372 m.  Airports such as Gloucestershire in the UK, St Tropez La Mole, Egelelsbach (Frankfurt), Tousses (France) all have runways which are too short for VLJs if the wind is in the wrong direction or it's wet.  Cannes is also restricted to a certain few light jets.  Surprisingly, many larger business jets and regional airliners have better landing performance.

James Dillon-Godfray, Business Development Director at Oxford Airport added that there is no logic in operating these jets (which are charged out at about £1,500 an hour) where the hourly variable operating costs at the premier business airports with no runway restrictions such as Nice and Farnborough are up to £600 in landing fees, or more. 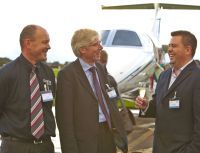 While the Light Jet market certainly hasn’t darkened the skies over Europe with several operators falling at the first hurdle, or not even getting off the ground (JetBird, Jet Republic, DayJet, Blikk Air, to name but a few) there was a word of caution from Alex Hendriks, Principal Advisor to Eurocontrol’s Air Traffic Management Director.  According to the latest Eurocontrol traffic projections capacity constraints for the anticipated growing numbers of very light jets (VLJs) will be at airports, rather than in the sky.

By 2030 Europe’s existing airports could have a capacity shortfall equivalent to around 6,500 flights per day and as many as 50% of all flights could face delays as a consequence.  The new generation VLJs can avoid this restriction by ensuring they have performance-based navigation tools, such as Vnav approaches, he suggested.

Customer knowledge was another common theme and “knowing your client” is essential remarked David Fletcher, CEO of FlairJet , Europe’s first Phenom 100 charter operator.  FlairJet, which has achieved operating profit within its first five months of operation, has demonstrated that a light jet operation can be sustainable as long as costs are carefully monitored, customer networks maximised and personnel skills are utilised to best effect.  However, Glen Heavens MD of Synergy Aviation argued that due to operating costs and expected low pricing by clients it remains a perpetual challenge to build a scalable business.

Light Jets Europe will take place again next year at Oxford from September 22-23 September.  In the Gulf area Al Bateen Airport, which is ramping up its movements, will be the venue for the debut Private Aviation Symposium organised by MIU Events in March 2011.

Thanks to Jane Stanbury and Alison Chambers of Emerald Media for the article www.emeraldmedia.co.uk 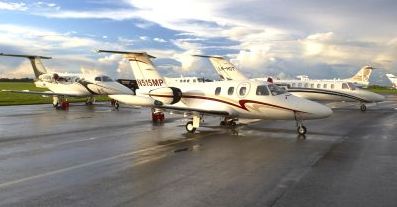