Even Stronger Appeal With Latest Mazda6 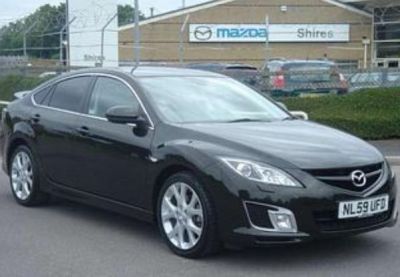 About a year ago, when testing an estate version of Mazda’s executive sector Mazda6 in estate car form, I suggested that the model had been kicking at the door of the premium car market.

Now, after experiencing the recently upgraded model in 5-door Sport form, I think that Mazda has more than prised that tight fitting door well and truly open, the more aggressive styling clearly having a proven sales attraction for those upwardly mobile executives seeking to break out of the usual pack of continental offerings.

This is a very fresh modern car, its new generation range launched at the beginning of 2009 and just this summer subjected to significant across the board improvements, both mechanically to enhance performance, economy and cleaner emissions, and with a better ride and handling, more advanced equipment and an enlarged options menu.

There is an extensive but clearly defined choice of no fewer than 22 models with capacity from 1.8-litre up to 2.5 litres and including a choice of three 2.2-litre diesel units.  Though pricing has eased up a little with these latest improvements the range remains good value.

My test car was the 2.2D Sport powered by the top 178 bhp engine that I found combined the right qualities of performance, driver satisfaction and though, actually a few bhp down on the earlier engine provided better economy, even better refinement and was claimed to have improved performance with a top speed of 135 mph, a brisk 0 to 62 mph (100 kph) acceleration time of 8.7 seconds and a combined consumption figure of a massive 52.3 mpg.

The emissions figure is also down by 5 g/km, thus qualifying for Euro 5 status.

The previous model rode so well that it is hard to identify any improvement, perhaps a better ability to cope with our deteriorating road surfaces though I suspect there is a more responsive feel through all the control functions that should be appreciated by discerning drivers.

That said it is a very easy driver, with a slick acting 6-speed sensibly ratioed manual gearbox with cruise control (as yet a 5-speed automatic unit can only be specified with the petrol engines) and powerfully smooth braking action.

The Mazda6 already had a good range of sensible safety equipment including the proximity warning lights in the front pillars that warned about that car in the blind area just as it overtook and now there are smart turn indicators, emergency stop signalling, front and rear parking sensors, Hill Hold Assist and swivelling AFS headlights.

Mazda has not gone overboard to create this flagship Sport version, from the outside car spotters would see the Sports grille, special alloy wheels, privacy glass side windows and the BiXenon headlights with cleaning system while inside there are aluminium foot pedals, a Bose 8-speaker sound system, partial leather trim, black out instrument dials with amber/blue illumination and heated front seats.

Only omission for a car of this class is satellite navigation.

I sat for several minutes in the test car appreciating the comfort behind the steering wheel, the logical interior planning, the quality of the materials involved and the overall build quality which was hard to better.  The conclusion is that the Mazda6 has started to develop an identifiable character of the calibre necessary to make it a frequent visitor to the corporate car park.

AUDI: Announced at the recent UK Audi Road Show of 2011 models that Audi has toppled its two major German rivals as Britain’s best selling premium brand car.  Audi has also claimed to offer values in the class with a 42% residual, close on twice its nearest rivals. www.audi.co.uk

CITROEN: The French car maker will be premiering a host of models at the Paris Motor Show including C4 and DS4 models plus a concept C-Zero model. www.citroen.co.uk

INFINITI: Starring at the opening of the luxury Infiniti brand’s new Sales Centre at 77 Piccadilly, will be the awesome 592 bhp Essence model.  Offered in both petrol and diesel V6 forms it will be joined next spring by a hybrid version. www.infiniti.co.uk

JAGUAR: 75 years of Jaguar cars! When Jaguar chief William (later Sir) Lyons unveiled the new SS Jaguar 2.5 he asked guests at the launch to guess the price of the luxury sports saloon – average was £632 – he astounded them by saying it would cost a mere £385! www.jaguar.com

LEXUS: The 2011 Lexus ISF has been revised to allow the 417 bhp V8 engine to comply with Euro 5 emissions.  Other innovations include LED daylight lighting. www.lexus.co.uk

MERCEDES-BENZ: London’s iconic black cab taxi cab has at long last moved into the 21st century with a state of the art, approved, cab being recently launched by Mercedes-Benz.  Based on the highly rated Vito van/MPV range the cab has been developed in the UK to feature all-wheel steering and a comprehensive specification of safety/braking systems, air conditioning, sliding doors plus very user-friendly disabled and wheel chair user facility.  Core price around £30,000. www2.mercedes-benz.co.uk

SAAB: The newly independent Saab company has announced that it will be concentrating its production and developments in Sweden.  They are also working on an electric vehicle project after recently developing the power unit for the new Saab 9-3 range to produce a class leading 119 g/km. www.saab.co.uk