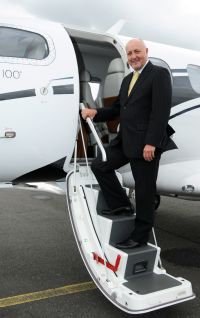 Al Bateen Executive Airport, situated in the heart of the United Arab Emirates (UAE) capital of Abu Dhabi, has launched a major upgrade programme.  It is the only dedicated executive airport in the region.  Originally built in the 1960s, Al Bateen had only handled military traffic since Abu Dhabi International Airport, located 20 miles outside the city centre, was opened in 1982, but in June 2009 it was granted new civil airport status.

A multi-million dollar plan is underway including an ILS precision approach capability, new hangars and MRO facilities, plus a hotel on site.  During the first quarter of 2010, Al Bateen experienced a 30% increase in movements.  The UAE has overtaken Saudi Arabia with the highest concentration of business jets in the Middle East, hosting 38% of the region’s fleet.

To head up this new investment Al Bateen has recruited Steve Jones, currently Managing Director of Oxford Airport, who joins in mid-November.  Steve has been at Oxford for ten years and is credited with its major development as a business airport.  He was previously with BAe at its Chester HS 125 plant since 1974. www.adac.com