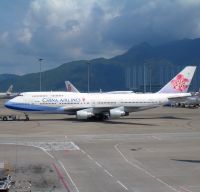 CHINA AIRLINES, the flag carrier of Taiwan, today formally announced the start of its joining process leading to full entry into the SkyTeam airline alliance.  The process is expected to be completed by mid-2011.  China Eastern has also signed an agreement to join SkyTeam, a further indication of the thaw in relations between the Communist country and its offshore island.  Headquartered in Taipei, China Airlines is the largest airline of Taiwan, home to one of the world’s most dynamic technology-driven economies with abundant two-way tourism opportunities.  Shanghai-based China Eastern said in April of this year that it had come to a tentative agreement to join SkyTeam. www.china-airlines.com