Air Southwest discussions at a "a crucial stage" 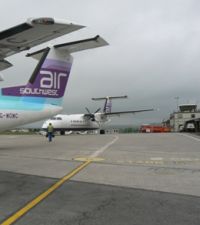 PLYMOUTH, one of the UK’s most cut-off major cities from a transport point of view, could be left without an airline if sale negotiations regarding Air South West fail to be realised.  Even if the airline is sold there are no guarantees that the present services to Gatwick and other destinations will be maintained.  The airline, a successor to British Airways owned Brymon Airways, is part of the portfolio of property developer Sutton Harbour Holdings Plc.  Sutton Harbour also owns Plymouth City Airport on a long lease from the local council.  The company recently closed one of the two runways in order to build houses.  A combination of the recession, extreme weather at the start of the year and the volcanic ash crisis resulted in the airline making a £3.94m loss and Sutton Harbour putting the airline on the market.  Eastern Airways appear to be the only potential purchaser at the present time.  The situation is made even more complex with some of Air South West’s 50-seat Bombardier Dash 8 aircraft nearing the end of their leases and Eastern operating non-compatible 29-seat J41 turboprops.  Sutton Harbour says negotiations are at a "a crucial stage". www.airsouthwest.com