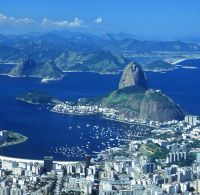 AMERICAN AIRLINES is to introduce what it calls a “seasonal service” between its Dallas/Fort Worth (DFW) hub and Rio de Janeiro (Brazil) (GIG) starting 16 December this year.  Operating three days per week it stops on 4 April 2011, and then resumes for the summer season between 9 June and 22 August 2011, starting once again on 22 November.  The flights will be operated by a Boeing 767-300 aircraft that offer two-class service with 28 Business Class and 191 Economy Class seats.  Unusually for a US airline American’s announcement highlights the 2014 Soccer World Cup.  American also flies to Rio from JFK and Miami. www.aa.com