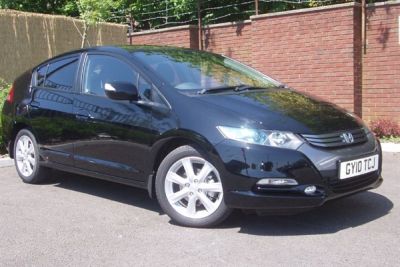 Ghostly, my friend said as we cruised along in serene silence at 70 mph in Honda’s second generation Insight hatch back.  It seemed as though we were coasting but uphill!

Yes, Honda has proved that a car can be frugal without shouting it from the roof tops.  Certainly there is much more car to this Insight than the rather cramped predecessor of the same name and the later Civic Hybrid.  Indeed there is also a lot of style that proves modern innovation need not be compromised by design constraints.

Honda is among the pioneers in hybrid and alternative power sources, not so long ago hosting a workshop on the subject which proved eye-opening to both myself and other invited journalists.  It is obvious that this company is well on the march into the future and this Insight model convinced me that it is a practical, not excessively costly, form of transport, fortunately lacking in any eccentricities or unusual gimmickry.

Here is a sensibly sized four (or even five at a pinch) seat hatch back, clean lined, bearing obvious family resemblance to the Honda range though a stand alone design (employing the underpinnings of the well proven Jazz model) with a hint of sporty styling that incorporates a good sized 408-litre luggage area augmented by 60/40% split folding rear seats.

As with the earlier Civic Hybrid, the Insight features four-cylinder 1.4-litre engine, albeit further developed, located transversely under the bonnet that is augmented by an electric motor to provide a combined power output of 97 bhp, delivered through
a reasonably smooth acting and very responsive CVT automatic transmission to the front wheels.

The driver is confronted with an ultra modern fascia that is less daunting than it actually looks though the ever fluctuating digital speed indicator is not to my liking and, of course, there is additional information to show just how well the economy is being delivered.

A green economy button cuts some of the overall power, contributes to that quiet running ability, allows more effort to go into the air conditioning system, but come the need throttle kick-down will produce full acceleration when some noise intrusion is noticeable.

Performance is competitive for the size of car, Honda claiming a top speed of 113 mph with 62 mph (100 kph) reached in a passable 12.5 seconds.

The real acid test is what do you get in the way of economy?  According to the official figures up to 62.8 mpg on the extra urban cycle though I suggest amore realistic target would be around 45 mpg under mixed condition.  There again, it really depends the way you drive.

The low exhaust emissions and the fact that it is hybrid powered does not qualify for free road tax but freedom from congestion charges in the UK, the latter undoubtedly worth considering for those frequenting such places.

In all respects the well equipped Insight (there are four specification versions on offer) and tested here is the entry level iMA ES-T which is close to executive standards for kit and is smartly finished close to premium grade qualities.

Driving characteristics?  Perhaps not totally a slick performer but an easy drive with good response through all controls, a bit busy on the ride especially when lightly laden but with good driver vision and an accommodating driving position for all shapes and sizes.

To a great degree the Honda Insight Hybrid makes a lot of sense for owners intent on lowering their motoring overheads as well as placating those concerned with saving the planet.

A NEW SWIFT IS HATCHED

SUZUKI’S hugely popular small Swift hatch back range moves into a new generation model with the arrival of a totally new 3-5-door model that is overall slightly larger than the outgoing model.

Designed and made in Europe, the initial impression at launch was of an exceptionally well made and finished product that demonstrated near impeccable driving qualities on the German test route.

Clever packaging, combining with impressive styling, good levels of practicality, projects the new Swift strongly into a competitive market where it has the credentials to challenge all the mainstream players.

The three version range is based on two power plants, an impressive Fiat designed 75 ps 1.3 Multijet turbo diesel and a Euro 5 compliant 1.2 litre petrol unit developing 94 ps and both driving through a 5-speed manual gearbox with the option, at a slightly later date, of a 3-speed automatic petrol unit.

Specifications across the range are seriously competitive with all cars offering a seven-airbag system with ESP as standard – Suzuki has also been quick off the mark to gain a 5-star Euro NCAP rating – while mid-range models come with air conditioning and alloy wheels, the flagship SZ4 with automatic air conditioning, push button start, cruise control, Bluetooth connectivity, automatic headlamps and rear privacy glass.