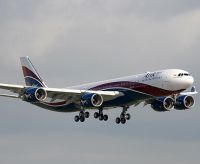 ARIK AIR, which now claims to be Nigeria’s leading commercial airline, has finished the summer season by registering a growth in uplift of 10.3% for the three-month period ending 31 August 2010 compared to the same period last year.  During August, and only eight months on from lifting its four millionth passenger, the airline reached another landmark when it carried its five millionth passenger on 6 August on the Johannesburg to Lagos route.  Reaching the milestone of five million passengers is particularly impressive given that Arik flew on its first scheduled flight (Lagos to Abuja) on 30 October 2006 and is yet to celebrate its fourth anniversary.  The launch of its first international route was Lagos – London, on 15 December 2008.  Since then, it has added Lagos – Johannesburg (9 June), Abuja – London (9 November) and Lagos – New York (9 Nov) to its long haul operations as well as opening regional routes from hubs in Lagos and Abuja to Dakar (Senegal), Accra (Ghana), Freetown (Sierra Leone), Cotonou (Benin), Banjul (The Gambia) and, most recently, Monrovia (Liberia). www.arikair.com