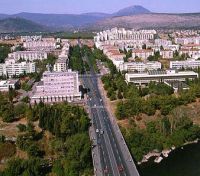 PODGORICA, capital and largest city of Montenegro, and once called Titograd, is to gain its first Hilton Hotel.  Scheduled to open by the end of 2012 the 200-guest room property replaces an historic existing hotel which is being extensively re-modelled.  Montenegro escaped the worst of the Slavic wars at the end of the last century and has been an independent pro-western democracy since 2006.  In neighbouring Croatia, Hilton has been represented since 2005 with Hilton Imperial Dubrovnik, located some 130km from Podgorica by road.  In late 2012 Hilton is to open a Garden Inn at Davos, Switzerland. www.hilton.com