ON TOUR: The Goodwood Revival Meeting 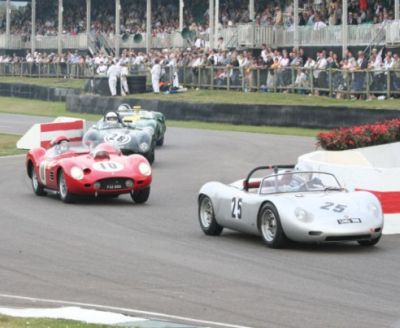 The Goodwood Revival motoring event, which begins next Friday (17 September), now ranks second only to the British Grand Prix at Silverstone as the country’s most popular motor sport event.  By the time the last spectator departs on Sunday, and with good weather prevailing, something like 120,000 spectators would have passed into the Duke of Richmond’s extensive estate, a fantastic achievement since the whole occasion is pure nostalgia, no car (or motorcycle) built after 1966 allowed to compete. 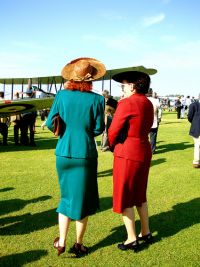 Visitors are encouraged to wear the fashions of the 1950s and 1960s too, and the former RAF World War II airfield, which sits in the middle of the motor racing circuit, will again play host to vintage de Havilland biplanes, the commuter aircraft of their day, pleasure flights a feature of the weekend.

The rules for the media are strict.  Track pass holders and TV must wear period dress.  The Duke is insistent.  Normal patrons can dress how they like, but the classic line is encouraged.

Goodwood is an anomaly and a very successful one at that, combining a quite separate motor racing track, speed hill climb, a flat horse racing course “Glorious Goodwood” and the Goodwood Park Hotel and Country Club with not one but two Championship golf courses.  You can visit all year round.

Since its inauguration in 1998, the Goodwood Revival has become the world’s most popular historic motor race meeting and the only event of its kind to be staged in the romantic time capsule of the 1940s, 1950s and 1960s.  As a motor racing circuit Goodwood thrived between 1948 and 1966.

It was the scene of the near fatal crash of the then Stirling Moss in 1962, and of his own ‘revival’ if that is the right word, as the senior personality in today’s motor racing world.  Perhaps not so well known, it was at Goodwood that New Zealander Bruce McLaren (aged 32) lost his life when his McLaren Can-Am car crashed on the Lavant Straight just before Woodcote on 2 June 1970.  McClaren have been eight times constructor champion.

John Surtees will be honoured at this year’s event, the only man to be world champion on both two wheels and four.  BRM (British Racing Motor) will also be highlighted, the winner of 17 Grand Prix and Graham Hill’s victory stead three times at Monte Carlo. 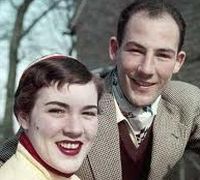 The races themselves will include an amazing selection of cars ranging from one litre Austin Healy Sebring Sprite, seven-litre Le Mans winning Ford GT40 and, by today’s standards, tiny space frame rear-engined Lotus 18 in which Moss won the 1960 Monaco Grand Prix.

The Revival Weekend is not just motor racing.  If you have not been before make time to visit the Earls Court Motor Show.  Here, and under cover, it is not all vintage.  Expect to find the new Jaguar XJ.  The Freddie March “Spirit of Aviation” will include some rarely seen aircraft.  For those not inhibited with money Bonham will be conducting a car auction, whilst 1930s-style the March Motor Works “art deco” style showroom building houses a range of mouth-watering 1950s and 1960s road and race cars. 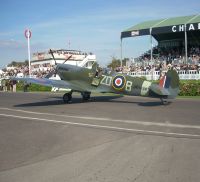 RAF Westhampnett will mean nothing to the present generation but it was the official name of Goodwood Airfield during the Battle of Britain where it played a key role.  It was also the site of Sir Douglas Bader’s final sortie.  Throughout the Revival weekend a series of legendary aircraft – long associated with Goodwood – will be flying over the famous motor circuit including Hurricane, Spitfire and the Battle of Britain Memorial Flight Avro Lancaster.  There is a period fairground and an old-fashioned style open market.

On Revival Sunday, a very special Goodwood-based RAF pilot will be honoured with a moving tribute.  American-born Billy Fiske joined the RAF long before the USA became formally involved in the Second World War.  Fiske was a dynamic and successful young American that wrote and directed movies and was a double Olympic bobsled champion.  He was the first American to volunteer to join the RAF when war was declared, and joined the famous 601 Squadron, flying from RAF Westhampnett and nearby Tangmere, and dashing around the Sussex country lanes in his distinctive Blower Bentley.  Sadly he was one of the first US citizens to lose his life in World War II, shot down in August 1940.

ADMISSION:  The gates open at 07:30 each day.  The organisers are keen to get motor racing in the blood at an early age and accompanied under 12s get are admitted for free.  A basic pass for all three days costs £107, with standalone tickets priced at £35 for Friday and £50 for Saturday and Sunday.

Goodwood also has one of the best and most informative of websites anywhere.  Perhaps its 21st century approach is the secret of its success. www.goodwood.co.uk