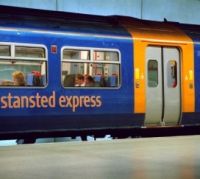 THE STANSTED EXPRESS, often called the “Stansted Slow”, has run into trouble after a complaint by a member of the public.  The train service, run by National Express, which makes two stops on its way to London’s Liverpool Street station, had put in place posters "Train to London 35 minutes" with images of the capital, partly to help those not fluent in English.  But the Advertising Standards Authority (ASA) noted that the journey to central London took 45 minutes.  It ruled that the advert was likely to mislead passengers.  The ASA pointed out that the train would reach Tottenham Hale in 35 minutes, a station well outside the central London area.  The train operator says the posters are being amended. www.stanstedexpress.com